Don’t Starve Together adds the highly requested multiplayer feature to Don’t Starve. It was originally scheduled to come out in Summer 2014, [1] though a specific date was not given. However, sign-ups for a limited-access, closed Beta were released. It came out on Mac and Linux after being finalized on Windows.

Other Don’t Starve Together games and versions

Don’t Starve Together has multiple ways to play with others: LAN, network, and matchmaking play. Many items have been balanced or removed in order to keep the game fair. Game mode and PvP are optional by the server operator. Dedicated, player-hosted and LAN servers are available, and chat is global or local depending on the server admin’s preference. A type of server called "Friends Only" allows a server to be created whereby the only people who can join have to be on the hosting player’s Steam friends list. Many console commands have changed or been removed for DST.

There are three game modes: Survival, Wilderness, and Endless. Additional game modes are possible with the use of mods.

Survival is the default mode. It is a more difficult cooperative mode. Each player that dies becomes a Ghost Character that drains the sanity of living players by 3.3/min (up to 10/min total). Each player can resurrect themselves at the Touch Stone once. Resurrection by other players using a Telltale Heart incurs a maximum-health penalty, which can be cured with Booster Shots. Other resurrection alternatives like Life Giving Amulet or Meat Effigy will require magic. When all players are dead, a 120-second timer starts, and the world resets if no players are revived in that time.

Wilderness mode spawns players in random locations across the map. Players that die are returned to the character select screen, allowing them to respawn in a new random location as a new character with their map progress wiped. This is the only mode where players can respawn as a different character. Resurrection items don’t exist, and the Touch Stone will not resurrect players. The world never resets.

Endless mode is a more relaxed mode that doesn’t force players to cooperate. The world never resets, and ghost players may resurrect themselves at the spawn portal as many times as they wish, incurring a maximum-health penalty each time, similar to death in Survival mode.

Ghost Players are a new feature that introduces the ability to live after death, although in a downgraded state. Whenever a player dies, a skeleton spawns at their death point. Their inventory is dropped, and they become a ghost. Upon death, WX-78 also loses its upgrades.

Ghosts can Haunt items and structures, possibly setting objects on fire, or affecting them in some other way. A ghost can be resurrected using a Touch Stone, Meat Effigy, Life Giving Amulet, Telltale Heart. If the server is set to Endless mode, players may also resurrect through the Florid Postern Portal. Resurrection from death incurs penalties, and respawning from a Telltale Heart or the Florid Postern Portal will apply an additional 25% maximum health penalty on the player, which caps at 75% maximum health points (leaving the player with 25%). The health lost to this penalty can be restored by 25% using a Booster Shot. In Survival Mode, living players will suffer a continuous 3.3/min sanity drain for each ghost (up to 10/min total).

Don’t Starve Together features Caves and Ruins, which must be toggled on via a tab in the Server Creation menu. The Caves and Ruins now share the same map level, since separate servers are required to run a map level. The current build includes content from Reign of Giants and A New Reign. Shipwrecked is not implemented in DST, but some mods make a portion of the content available.

Thermal stones now have durability, intended to represent cracks formed as a result of heating and cooling. Armor has less durability (by 30%) and can no longer be multiplicatively stacked as before; the game now uses the better armor’s absorption and then divides the damage absorbed between the two worn armors weighted by their absorption. The Pan Flute now has the ability to knock other players besides the user unconscious for a short time, if PVP is enabled.

Due to gears being a less available resource, WX-78 now starts with 150 health, sanity, and hunger, but each set of gears provide less of an upgrade (still bringing him to 300/400/200 overall after 15 upgrades).

Willow has a large part of her advantages (and a few disadvantages) removed. These changes were mainly added due to the abuse of Willow burning things or attacking players in their first day. Willow’s fire damage reduction is now only 50%, instead of 100%. Her lighter now lasts 1.25 days, but can be crafted. Willow no longer creates fires at low sanity and has a 10% boost on sanity gained from fire. However, this entire modification has created a generally negative response from the community. On June 3, 2015, Willow received more changes. She now gets colder when insane, is completely immune to fire for the first three seconds of exposure, can cook with her lighter (reducing its durability by 1%), can craft her lighter with fewer materials and starts the game with Bernie, the stuffed bear seen in her portrait.

Woodie’s Wood meter is now present at all times, which serves to warn players of the Werebeaver; once the Wood meter reaches 25, the transformation occurs. Woodie can eat Grass, Twigs, and Logs to replenish the Wood meter. The Werebeaver loses many of its benefits, discouraging its usability for griefing and PvP. The Werebeaver now shares Woodie’s Health and Sanity meters, and the Wood meter replaces the Hunger meter. Letting the Wood meter reach zero induces the same health drain as letting the Hunger meter reach zero. Death in the Werebeaver form is true death; Woodie becomes a beaver-looking ghost but still cannot use the map, making it harder to revive oneself. His sanity drains incredibly quickly, about 3/second, making it far less beneficial to stay transformed. To turn back into Woodie the player must get the Wood meter back to 100. However, the Werebeaver can no longer eat Pine Cones, Grass Tufts, Saplings and the like. To make up for the changes, Woodie gains Sanity from planting trees, and Lucy the Axe cannot be used or even picked up by other players. During a Full Moon, Woodie instantly transforms into the Werebeaver as he would normally in Don’t Starve. However, during the Full Moon, the Wood meter decreases rapidly, even after the player has managed to fill the meter and exit Werebeaver state, making it rather difficult, but possible, to obtain Glommer’s Flower. The rate at which the wood meter depletes is unknown.

Maxwell now comes only with his Codex Umbra and 6 Nightmare Fuel. His Sanity boost has been reduced from 20/min to 6.67/min. The Shadow Tab was added, in which one can craft the Codex and different types of puppets. Puppets cost 2 Nightmare Fuel, a tool matching their action, and 20% (worker) or 35% (duelist) of Maxwell’s maximum sanity.

Many mobs have had their health increased:

Several new entities were added to rebalance characters, giants, and seasonal mechanics for the multiplayer aspect of the game:

Sleeping has been significantly changed. Normally, when going to sleep, the day would fast-forward to sunrise and replenish health and sanity at the cost of hunger upon waking up. However, when on a server, sleeping will not fast forward to sunrise but will instead leave the player unable to move and unaffected by the night monster. This will replenish health and sanity while draining hunger faster than normal over time; the rate at which will be dependent on what type of structure or item was used to sleep. When using a normal sleeping item, the player can wake themselves up by trying to move. If the player was put to sleep (pan flute, cooking a mandrake, etc.), they will reawaken after a small amount of time. The player will always wake up if hunger reaches 0.

The Map has been modified to include a fog of war, preventing players to see changes to remote locations in the map. Each player’s explored areas are tracked separately, however players can share their exploration with others using Map Scrolls.

Players communicate and express themselves through two chat modes: global chat (accessed via "Y" key by default) and local "whisper" chat (accessed via "U" key by default). Global chat is seen by all players, whether they are up on the Surface world or down inside Caves. Whispered messages, on the other hand, can only be seen by players who are in the vicinity of the speaker. Whispered chat looks the same as global chat, but the word "Whisper" is displayed before it.

Special skin emotes such as /yawn and /sleepy, or /eyerub, are rewarded to players who have certain sets of Skin items in their collection.

In addition, special Loyal quality emotes exist, such as /swoon. 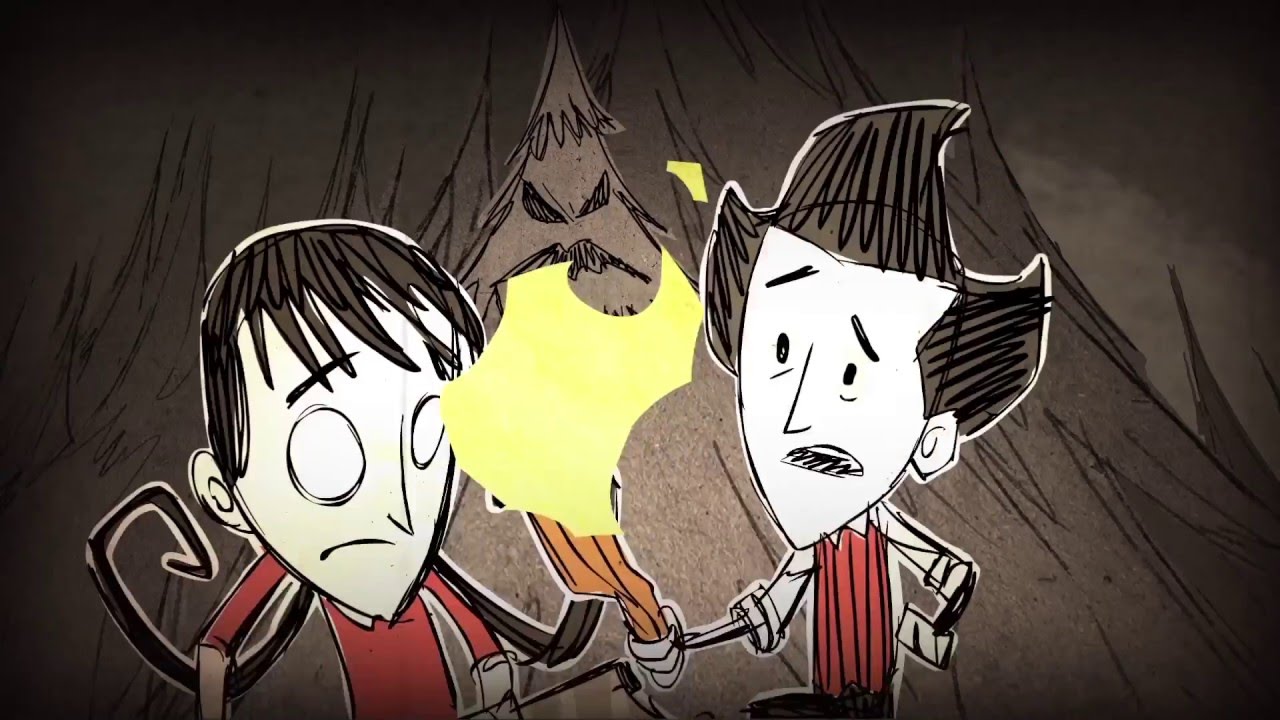